This background note was written by Alexandra Albers-Schoenberg, Associate Director at INSEAD’s Global Private Equity Initiative (GPEI), under the supervision of Claudia Zeisberger, Professor of Entrepreneurship at INSEAD and Academic Director of the GPEI. We wish to thank Michael Prahl and Bowen White, both INSEAD alumni, for their significant input prior to completion of this note. It is intended to be used as a basis for class discussion rather than to illustrate either effective or ineffective handling of an administrative situation. Additional material about INSEAD case studies (e.g., videos, spreadsheets, links) can be accessed at cases.insead.edu.

Performance in private equity investing is traditionally measured via (i) the internal rate of return (IRR) which captures a fund’s time-adjusted return, and (ii) multiple of money (MoM) which captures return on invested capital. Once all investments have been exited and the capital returned to limited partners, the final return determines the fund’s standing amongst its peers, i.e., those from the same vintage with a similar investment strategy and geographic mandate. Whether it is in the top quartile is the question.

However, IRR and MoM, merely provide the first layer of insight into private equity fund performance. Other metrics offer a more nuanced view of performance over the life of the fund, and by various adjustments offer a return picture that is more comparable to the performance of public equity markets and other liquid asset classes. This paper explains the various metrics employed by general partners (GPs) and limited partners (LPs) to arrive at a meaningful assessment of a fund’s success.

IRR, the performance metric of choice in the PE industry, represents the discount rate that renders the net present value (NPV) of a series of investments zero. IRR reflects the performance of a private equity fund by taking into account the size and timing of its cash flows (capital calls and distributions) and its net asset value at the time of the calculation. 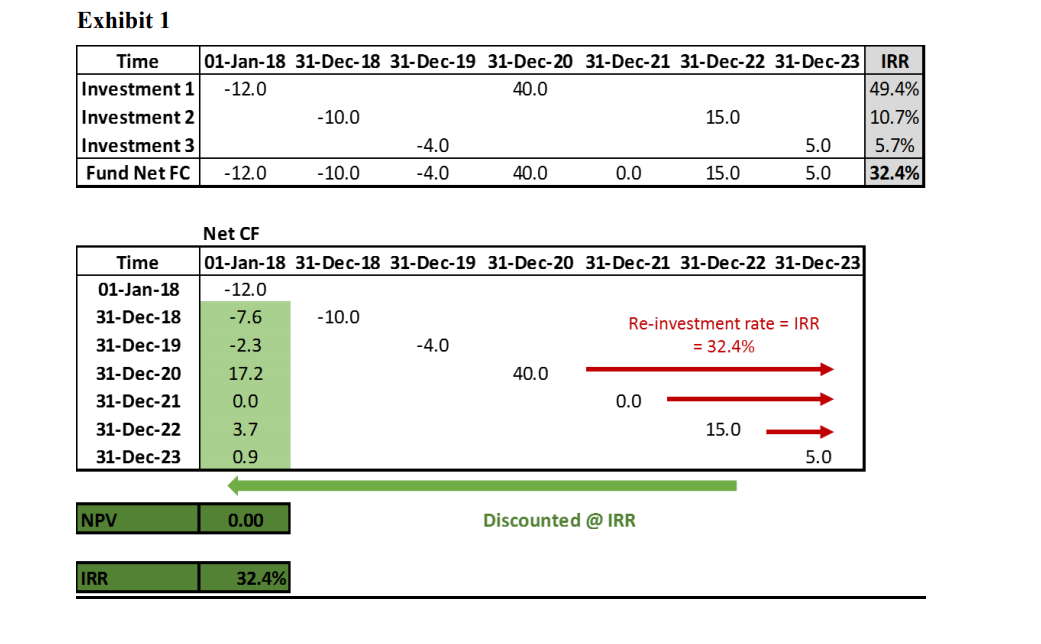 Despite its widespread acceptance, the assumptions underlying the IRR calculation and its practical application have created controversy. One of its main weaknesses is the built-in “reinvestment assumption” that capital distributed to LPs early on will be reinvested over the life of the fund at the same IRR as generated at the initial exit. Hence a high IRR (>25%) generated by a successful exit early in a PE fund’s life is likely to overstate actual economic performance, as the probability of finding an investment with a comparably high IRR over the remaining (short) term is low. This is particularly true as the nature of PE funds (all capital committed upfront) prohibits investors from reinvesting capital in other funds in the divestment stage (which would be the closest in terms of the risk-return proposition to the exited investment). The mechanics of the IRR calculation thus provide an incentive for GPs to aggressively exit portfolio companies early in a fund’s lifecycle to “lock-in” a high IRR. A related problem, although smaller in magnitude, is that IRR fails to take into account the LP’s cost of holding capital until it is called for investment.

Beyond these weaknesses, there are two additional problems. First is variability in how the metric is applied by GPs to aggregate the IRRs of individual portfolio investments to arrive at a fund-level return. In the absence of a clear industry standard, comparisons between fund IRRs are difficult. Second, the IRR is an absolute measure and does not calculate performance relative to a benchmark or market return, making comparisons between private and public equity (and other asset classes) impossible.

MIRR overcomes the reinvestment assumption problem of the standard IRR model by assuming that positive cash flows to LPs are reinvested at a more realistic expected return (such as the average PE asset class returns or public market benchmark); it also accounts for the cost of uncalled capital, unlike the standard IRR model. By basing the IRR on more realistic assumptions for both reinvestment and cost of capital, MIRR provides a more accurate measure of PE performance.

The effects of switching from IRR to MIRR for a given portfolio are as follows: astronomic 100%+ IRRs for “star” funds resulting from early exits are brought down into more reasonable territory, while funds suffering from early poor performing exits are no longer penalized on the unreasonable assumption that all investments (and even uninvested capital) will lose money. The MIRR method generally results in less extreme performance by both strong and weak funds.

A simple example of how the MIRR works is provided below. 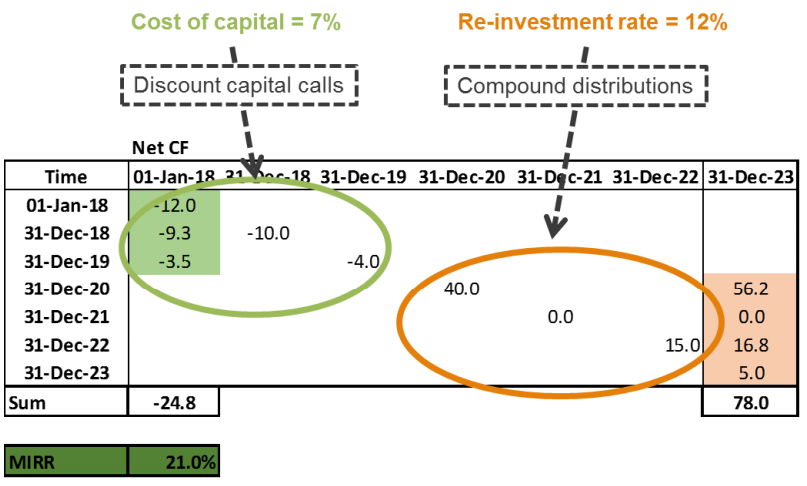 To understand how these ratios evolve over a fund’s life, the following definitions are helpful.

Therefore:
Residual value to paid-in (RVPI) represents the fair value of a fund’s investment portfolio (or NAV) divided by its capital calls at the valuation date, hence RVPI is the portion of a fund’s value that is unrealized. It is higher at the beginning,

5 when the majority of fund value resides in active portfolio companies. As the fund ages and investments are exited,
RVPI will decrease to zero.

Distribution to paid-in (DPI) represents the amount of capital returned to investors divided by a fund’s capital calls at the valuation date. DPI reflects the realized, cash-on cash returns generated by its investments at the valuation date. It is most prominent once the fund starts exiting investments, particularly towards the end of its life. If the fund has not made any full or partial exits, the DPI will be zero.

Exhibit 3 shows the evolution of the TVPI, DPI and RVPI for a hypothetical fund over its entire life. 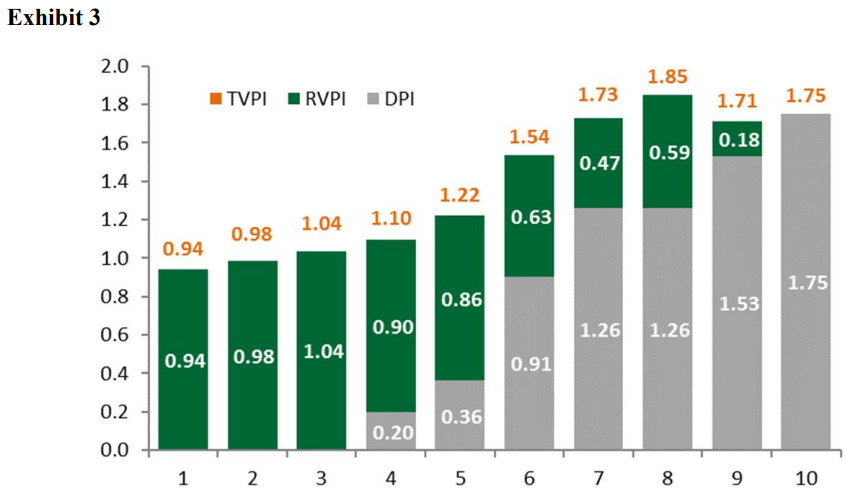 The evolution of TVPI, DPI and RVPI reflect the pattern of investment and divestment in a typical private equity fund structured as a limited partnership.

Before the fund draws capital and invests, there is already a drag from fees paid upfront in connection with setting up and managing the fund and its operations, which results in a TVPI < 1 in the first period.

LP investment committees often ask to compare PE funds’ performance with that of more traditional asset classes, which is far from straightforward. Unlike listed or traded instruments, much of PE’s performance reporting relies on interim valuations of unlisted and illiquid investments (i.e. the components of a fund’s NAV), making precise “mark-to-market” impossible.

Furthermore, PE is dominated by outliers, which are difficult to “index”, and its risk-return patterns are quite distinct from more traditional asset classes. It is challenging to gain broad (index-like) exposure to PE, unlike public markets were building a diversified portfolio is quite straightforward.

Moreover, the standard performance measures in PE – IRR and MoM – are not directly comparable to liquid asset = classes where valuations and returns are easily determined through a daily mark-to-market. IRR takes into account the timing and size of cash flows, while public equity benchmarks use time-weighted return measures. Despite the problem of comparing apples to oranges, attempts have been made to arrive at a (somewhat) realistic comparison, as detailed below.

A frequently cited method is the public market equivalent (PME) approach, an index-return measure that takes the irregular timing of cash flows in PE into account. PME compares investment in a PE fund to an equivalent investment in a public market benchmark (e.g. the S&P 500). Selecting the right index when using a PME method to find alpha is important, as different indices can provide a completely different picture.

Below we describe the most commonly used PME methodologies.

Long-Nickels PME (LN PME): The first PME method was developed by Long and Nickels in
1996.7

It compares the performance of a PE fund with a benchmark by creating a theoretical investment in the index using the fund’s cash flows. It assumes that all cash flows resulting from capital calls or distributions from the PE fund are replicated in a public market index; the returns generated by these evolve over time, mirroring the index. The LN PME then compares the IRR

generated by the investment in the index and the IRR generated by the fund to gauge out/underperformance. Put simply, every capital call from the PE fund triggers an equivalent purchase in the public market index and every distribution triggers a sale of the respective index stake.

An example of how the LN PME works is provided below: 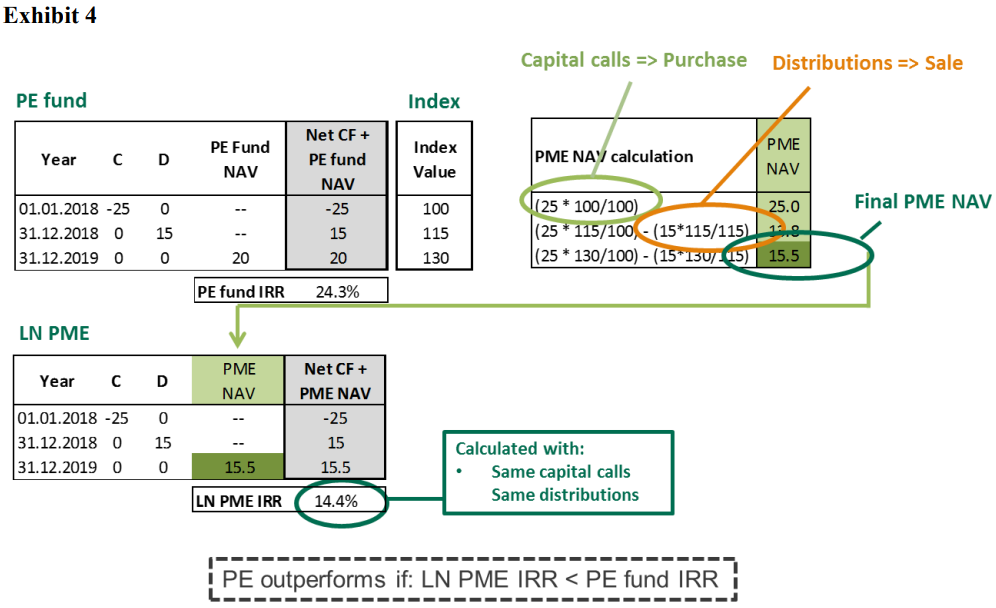 The LN PME allows for a direct comparison between PE fund returns and public market returns. However, in a case of high PE fund distributions (e.g. by a high-performing fund), the mechanics of the LN PME may produce a negative PME NAV, effectively resulting in a short position in the index.

The PME+ and the PME were developed to address this shortcoming, both of which use a coefficient to re-scale the private equity fund’s distributions so the public market NAV does not go negative.

PME+:8 The PME+ follows the same principle as the PME. Again, a theoretical investment is made in the index by using the fund’s cash flows. This time, however, the distributions are rescaled by a factor lambda so that the PME NAVs can’t be negative. The lambda is chosen so that the final PME NAV is the same as the final PE fund NAV. The re-scaled distributions are then used to calculate an IRR for the theoretical investment. PE outperforms if the calculated PME+ IRR is smaller than the IRR of the PE fund.

An example of how the PME+ works is provided below:

Like the LN PME, the PME+ allows for a direct comparison between the PME+ IRR and the PE fund IRR, and avoids negative PME NAVs. One weakness, however, is that it does not match the cash flows perfectly.

Kaplan Schoar PME (KS PME):9 The Kaplan Schoar PME measures the wealth multiple effect of investing in the PE fund versus the index. It represents the market-adjusted equivalent to the traditional TVPI. The KS PME incorporates the performance contribution of a public market index by compounding each fund cash flow – both capital calls and distributions – based on the index

performance; index performance is measured between the date of the cash flow and the valuation date. When the fund’s actual NAV is added to the compounded distributions and divided by the compounded capital calls, KS PME produces a multiple that represents the out/underperformance of the PE fund relative to the market index.10 If the KS PME is greater than 1, the PE fund outperformed the public market index.

A numerical example is provided below using the same fund cash flows and index performance used in the LN PME. 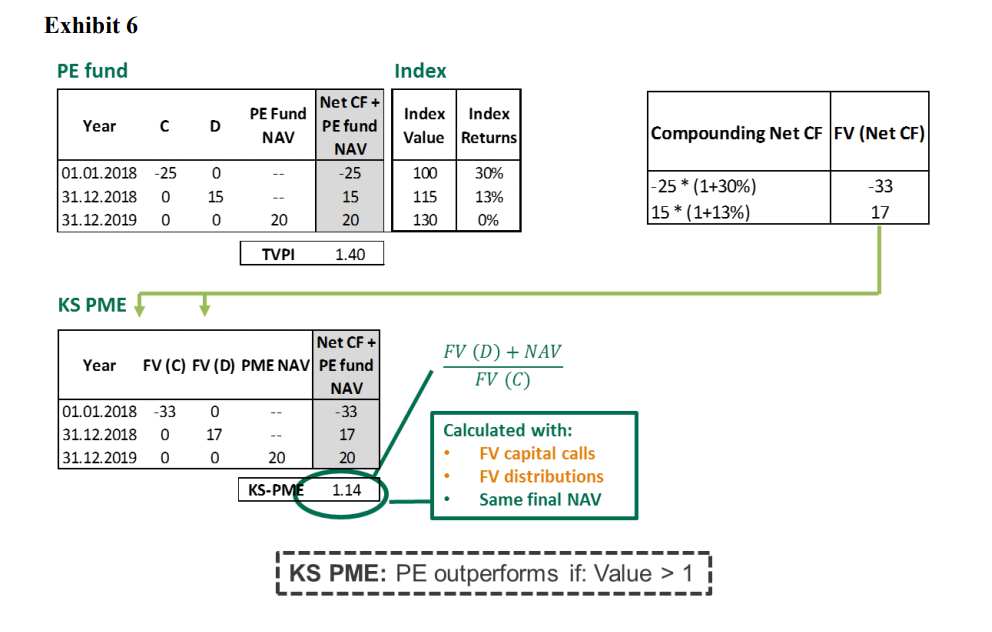 In the example, we include the returns generated by the index in a separate column. Compounding the cash flows by these returns generates the corresponding future cash flow of the capital call or the distribution [i.e. FV (C) or FV (D)]. The 1.14 KS PME statistic generated represents the outperformance of the PE fund.

The KS PME is easy to calculate and does not have the flaws of an IRR calculation, However, it ignores the timing of cash flows.

The most recent method to compare private equity returns against public markets is the so-called direct alpha.11 This has much in common with the KS PME, and uses the exact same methodology to adjust the cash flows (i.e. compounding by index performance).12 The key difference is that direct alpha quantifies the out/underperformance of the PE fund by calculating the IRR of the compounded cash flows plus fund NAV, rather than a multiple of performance. An example is provided below. 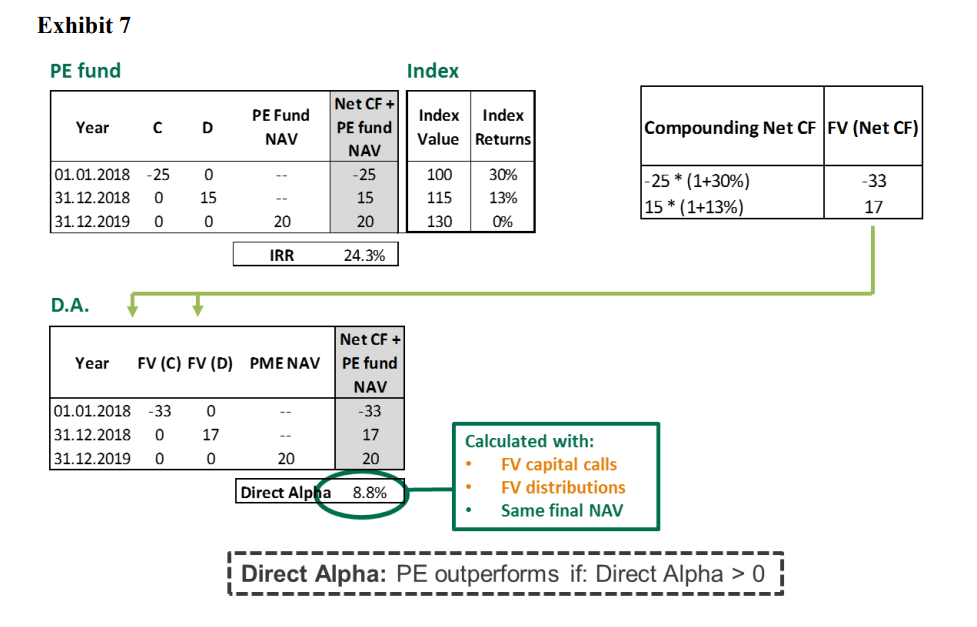 The private equity asset class has unique characteristics, including the irregular timing and size of cash flows, making the measurement of returns far from straightforward and difficult to benchmark with other asset classes. The widely used IRR and MoM return measures have their own flaws and are not ideal to portray and compare PE return figures. As the market is maturing, there is hope that more sophisticated measures may become standard. It is up to LPs, as multi-asset class investors, to promote and request them.