Will Late-Stage Venture Funding Pay Off?

It is uncertain whether private investors will capture the value they expect from tech unicorns.

Uber, Didi Chuxing, Airbnb… these names immediately evoke images of unicorns, warchests and disruption, as well as reflect the 14x growth in annual venture capital investment since the 1990s. But they also call to mind a more cautionary image in today’s frothy VC market – a bubble – and raise questions about the sustainability of valuations in a market fueled by new entrants and record VC and PE dry powder.

Traditionally, venture capitalists have provided small sums of capital in staged funding rounds to nurture and test the viability of disruptive, high-risk business models in an entrepreneurial environment. Recent data indicate that this role remains alive and well and has in fact thrived over the past decade. More accurately described as early-stage venture capital, this segment of the market has maintained a remarkably consistent share of total VC investment volume since the late 1990s (Exhibit 1A), reflecting its rapid growth alongside the larger end of the VC market1. 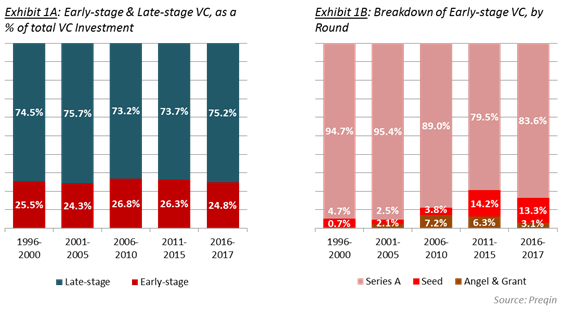 While early-stage rounds have maintained a consistent share in aggregate, the composition of early-stage funding has evolved significantly (Exhibit 1B), notably with the emergence of angel and grant funding rounds in the 2006-10 period and angel funding rounds in 2011-15. Given the 14x growth of the overall VC market and the consistent share of early-stage VC, the sharp increase in the share of angel and grant as well as seed rounds translates into an exponential, 59x increase in the volume of funding invested in business models at the very earliest, highest-risk phases of development since the late 1990s. 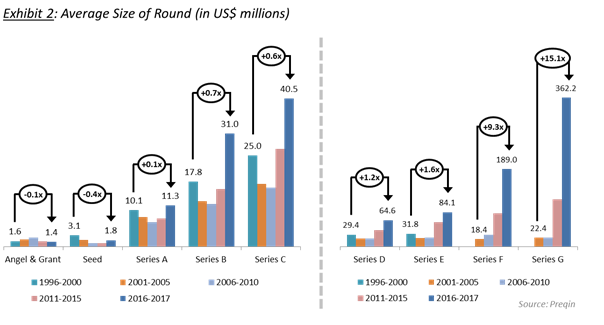 The emergence of the mega-round

To assess the growth in large, late-stage venture capital rounds, our dataset is re-organised according to the size of an investment round (note: not valuation, the total dollar amount deployed in the round). The availability of funding for large, successful VC-backed companies wishing to remain private is made clear by Exhibit 3A: The share of VC rounds greater than US$100 million has grown from less than 10 percent of total VC investment in the late 1990s and early 2000s to nearly 50 percent in the 2016-2017 period to-date. At the top end of the spectrum, investment rounds over US$1 billion are largely a recent phenomenon, as 38 of the 47 such rounds in our dataset were closed from 2014 onwards. 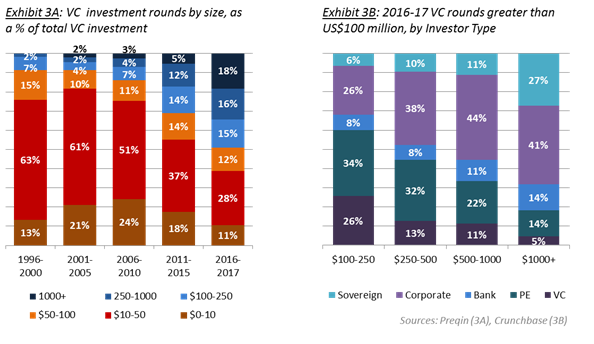 Large and mega VC rounds have been dominated by a new set of players that are becoming increasingly involved in VC-style investment, namely sovereign and corporate investors (Exhibit 3B), as rounds of investment over US$500 million exceed the mandate of all but the largest PE and VC players2. By far the largest sovereign and corporate investors in these rounds are Chinese, notably Alibaba-linked entities and various Chinese state-owned financial institutions. Softbank and Singapore government-linked entities also participated in a significant number of large rounds, while other corporates largely invested in start-ups aligned with their core businesses.

The impact: valuations, exits… and time

With non-fund investors providing funding at the top end of the market, as well as VC and PE dry powder at an all-time high, valuations across VC-style investment have been on the rise. Emblematic of this valuation inflation is the number of rounds that valued a start-up at US$1 billion or more in recent years, i.e. unicorn funding rounds. What remains unclear is whether these valuations will be maintained at exit and deliver on investor’s expectations, or disappoint and generate losses; at mid-year 2017, the glut of privately-held unicorns was growing (Exhibit 4A). 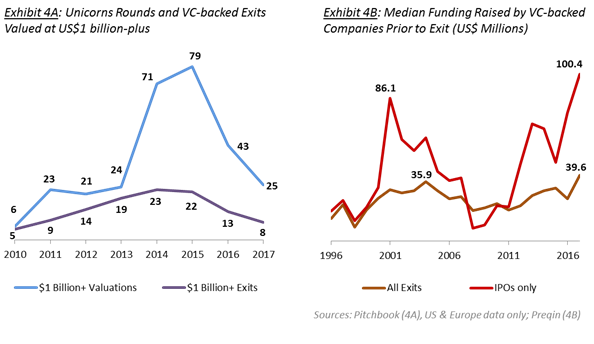 The availability of capital at all funding rounds and the growth in late-stage investments have allowed start-ups to remain private and independent longer, particularly those that eventually tap public markets. Indeed, VC-backed companies that were sold in the first half of 2017 had raised more money prior to exit than in any year on record (Exhibit 4B). While this allows entrepreneurs to run longer with an extended focus on VC metrics (e.g. growth, cohorts, scaling, etc.) relative to the bottom line, it should make investors ponder the existence of a bubble.

Implications of the mega-rounds

At no point since the dot-com bubble have the VC industry and VC-backed companies captured so much the imagination of the investing and general public. The application of the VC investment model – backing high-risk business models with the potential to disrupt traditional industries and produce outsized returns – has spread beyond the industry’s early-stage origins, as billion-dollar businesses at scale are raising billion-dollar funding rounds. Indeed, the industry’s late-stage fire power is reshaping the way companies at the forefront of innovation develop and engage with the business landscape.

The question remains whether private investors will capture the returns public investors have reaped from the tech space in the past (e.g. through an investment in the Microsoft or Google IPO). Certainly not every unicorn will make it, and certainly not every investor (with the exception of a Softbank, Alibaba or Chinese government) has the scale or ambition to participate across a portfolio of mega-rounds. What is not in question is the blurring of the lines between traditional VC, PE, bank, corporate and sovereign roles in the tech landscape. In the meantime, mind the froth.

Bowen White is the Associate Director of the Global Private Equity Initiative (GPEI) at INSEAD and draws in this article on the recently launched book Mastering Private Equity: Transformation via Venture Capital, Minority Investments & Buyouts, which he co-authored with Professor Claudia Zeisberger and Michael Prahl. A companion book, Private Equity in Action, takes the reader on a tour of the private equity investment world through a series of case studies written by INSEAD faculty and taught at the world’s leading business schools.

2Categorisation of a round as sovereign, corporate, bank, PE or VC investor was determined by the type of a given round’s lead investor.↩

Cover image for this article is provided by Yosuke Muroya, CC BY-NC 2.0